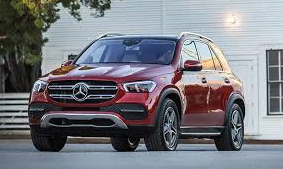 Mercedes-Benz had just launched the all-new GLE SUV in India starting from Rs 73.70 lakh for the GLE 300d variant and going all the way up to Rs 1.25 crore for the GLE 400d. The latter, launched as the G 400d Hip-Hop Edition, is a direct import, which contributes to its higher asking price.

The entry-level model in the range is the GLE 300d, which is powered by a 2.0-litre, four-cylinder diesel engine that is good for 245hp and 500Nm of torque. Mercedes also has a larger and more powerful 3.0-litre, six-cylinder diesel unit under the hood of the GLE 400d, which churns out 330hp and 700Nm of torque. Buyers looking at a petrol-powered model will be disappointed as the German luxury carmaker will not be offering the GLE 450, which is powered by a 3.0-litre, six-cylinder turbo-petrol engine paired with a mild-hybrid system. The combined system output is 367hp and 500Nm of torque.

The brand has revealed that the GLE 300d has already sold out until March 2020, with deliveries set to begin in April.

On the design front, the new-gen GLE gets a fresh grille design, a muscular shoulder line and large wheel arches, all of which give the SUV a more planted stance. Also on offer are new headlights with two LED bars and a new tail-light design.

In terms of equipment, the Audi Q7 and BMW X5 rival comes well-loaded even in its base spec. Features like seven airbags, a blind-spot monitor, four-zone climate control, dual 12.3-inch displays for the infotainment and instrumentation (with the What3words smart navigation system and Android Auto and Apple CarPlay-compatibility), electric adjust front seats, LED headlamps, panoramic sunroof, hands-free parking and a powered tailgate, are all offered as standard. In addition to these features the more expensive six-cylinder variant also gets nine airbags, a six-way adjustable powered rear seat, autonomous emergency braking, a 360-degree camera, a head-up display and adaptive air suspension.

Mercedes-Benz has also recently confirmed that it will launch its first all-electric car for our market – the EQC, in April 2020.  Besides this, the German luxury carmaker has also confirmed the launch of the new GLS, later this year.

Rupee Edges Higher To 71.21 Against Dollar