‘A real concern’: Police say 13 of 31 murders in Mississauga and Brampton last year were domestic incidents

Record year for homicides in Peel, up 19 per cent since 2018 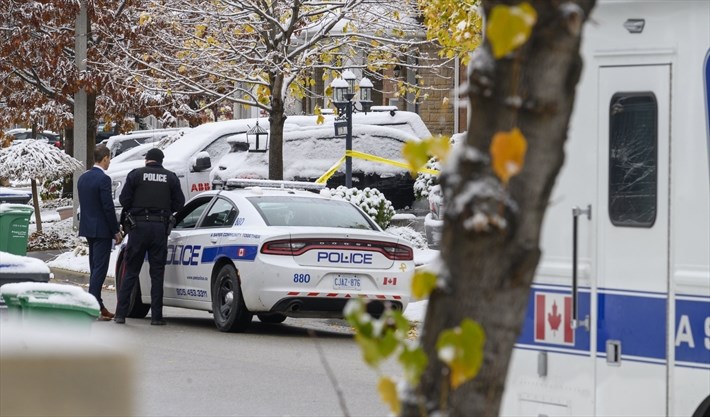 Peel Regional Police undertook a record 31 homicide investigations last year, 13 of which are deemed to be domestic incidents. Here, investigators are on scene at one of the latest domestics, which resulted in the death of Brampton brothers Jonathan and Nicolas Bastidas in November. Two boys, ages 12 and 9, were found dead inside of a Brampton home on Wednesday, Nov. 6. – Riziero Vertolli/Torstar

U.K.-France tensions rise over deaths of at least 27 migrants in…

‘No Progress’ On Eve Of Iran Nuclear Talks: UN Atomic…

“(Domestics) don’t traditionally get the same sort of attention in the media that the more dynamic gun or gang-related homicides do,” Andrews said. “That is a real concern for us. Domestic violence is not acceptable and it’s something that as a society, we need to address and eliminate.”

Of the 31 homicides in Mississauga and Brampton last year, police said 13 are considered a the result of domestic violence. The victims in those incidents range in age from 9 to 88. Andrews said domestic incidents often account for about half of Peel’s homicides in any given year.

Although it remains troubling, Andrews said the efforts of Peel’s family and intimate partner violence unit is starting to “bear results” in addressing this type of deadly violence.

“When you have resources dedicated to a particular sphere, you’re no longer getting generalist attention, you’re getting specialist attention,” Andrews said. “There are specialists (in the medical field) for heart surgery, and it’s the same concept in policing.”

Andrews also believes the “proliferation of firearms” in Peel has led to a rise in homicides. He said he has been with the police force for 30 years and hasn’t seen as many guns on the streets as there are now. Guns were confirmed to have been involved in 12 of last year’s homicides. Nearly half of those victims (five) were males ages 18 and under.

A troubling trend through 2019 was the amount of shooting incidents within a short time span on Hwy. 410 in September and October. During those months, there were four shootings reported on the highway. Two of them resulted in the deaths of D’rae Rhooms Peters, 18, and Giovanni Delahaye, 28, both from Brampton.

Andrews said he couldn’t recall a period in his career in which there were such frequent highway shootings in the region, but he also wanted to assure residents that they shouldn’t fear for their safety.

Chhattisgarh To Withdraw Pension To Those Detained During Emergency

Signiciant rainfall followed by snow to hit Mississauga and Brampton

Russia Says US Rehearsed Nuclear Strike Against It This Month