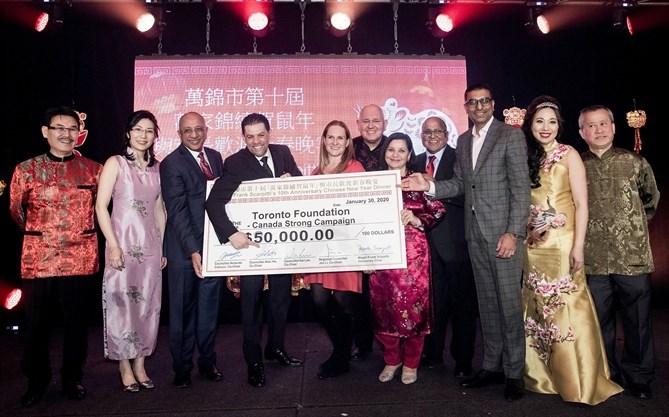 Paramount Fine Foods CEO Mohamad Fakih accepts a cheque for $50,000 during the Mayor’s Chinese New Year Dinner. The funds will go toward the Canada Strong fund he launched for the families of the victims of Ukraine Flight 752 shot down in Iran. – City of Markham photo

An outpouring of support for the people of Markham’s sister city, Wuhan, China, and the families of the victims of Ukraine Flight 752 were two “poignant moments” for Markham Mayor Frank Scarpitti from the annual Chinese New Year Dinner that bears his name.

“We are proud to support a number of worthy and noble causes, both locally and nationally,” he said on the heels of the event.

Due to the “generosity of spirit” of some 1,000 guests that packed the Le Parc Banquet Hall, dinner co-chairs — councillors Joe Li, Alan Ho, Amanda Collucci and Isa Lee — also decided to donate $10,000 raised via dinner proceeds to the city of Wuhan, China.

The next day, a local business owner who chose to remain anonymous matched it with another $10,000.

“This is not taxpayers’ money, this is money that was raised from sponsorship and ticket sales for that dinner and we’re going to find the appropriate agency to give that to,” said Scarpitti.

During the event, a video was played showing people in Wuhan yelling ‘Wuhan Jia you’, which means ‘Wuhan stay strong’ from their balconies.

“It was very moving to see people in a city that has been basically shut down because of the coronavirus displaying that their human spirit has not been put down,” Scarpitti said.

“I asked 1,000 people at Le Parc to send a message to the city of Wuhan that we are thinking of them and also to stay strong,” he added regarding a video made that night showing the audience’s support for the city at the centre of the outbreak of the new coronavirus, which has infected more than 28,000 and killed 563 in China as of Feb. 6.

“What was really touching about the night was while it was primarily a Chinese audience, people of all backgrounds took pride in participating in that exercise and several of them made comments (about) how meaningful it was for us to do that.”

Snow and cold in the forecast for Mississauga and Brampton