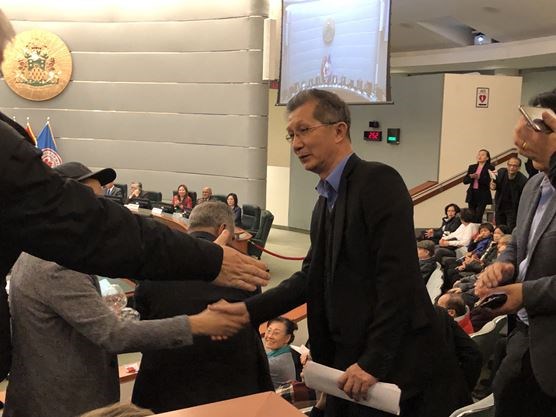 People line up amid increased security at the civic centre to attend a Feb. 11 council meeting where a proposed ban on foreign flag raisings was up for ratification. – Heidi Riedner/Torstar

If elected, the NDP pledged to allow seniors to defer property taxes

A proposal to eliminate the practice of raising flags of foreign nations at the civic centre failed to fly after Markham council voted 8-5 against the change to city policy.

It was standing room only at the meeting of council Feb. 11, with more than 70 people registering to speak to the matter on the agenda.

Seven hours of discussion included emotional pleas, personal stories of persecution, insults, cries of shame, boos and heated exchanges from all sides of the issue, sparked by a flag-raising ceremony at the civic centre Oct. 5 celebrating the 70th anniversary of the founding of the People’s Republic of China under Chinese Communist Party leadership.

Residents and representatives from various advocacy, civil and human rights groups, business organizations and ethnic associations across the GTA debated what essentially boiled down to whether the raising of national flags on public property was a cultural or political statement.

Former Markham-Unionville MPP and Liberal cabinet minister Michael Chan also questioned whether such a ban was illegal under both the country’s Charter of Rights and Freedoms and the Inclusion Charter for York Region.

The controversial issue simmering since October has not only divided council, but Markham’s Chinese community and the city as a whole, Coun. Keith Irish said, before voting in favour of the motion to prohibit the flying of foreign flags at the civic centre, except in the case of a visiting dignitary. The motion was put forward by Coun. Andrew Keyes and passed at general committee last week by a vote of 6 to 5.

“I believe in a Markham where one’s affection and respect or embarrassment and disdain for the country of their heritage is their own private affair, not imposed by him on others or by his city upon him in even the most symbolic of ways, like flag raising,” Irish said.

“I believe in a Markham where no public official either requests or accepts instructions on public policy from a friend or constituency; where no one group, no matter how well-intentioned, seeks to impose its will either directly or indirectly upon the general populace or the public acts of its officials, and where diversity is so cherished that an act against one group is treated as an act against all.”

Mayor Frank Scarpitti, however, said the prohibition would be a “step backward” for a city that has been “the poster child” when it comes to celebrating diversity and inclusivity.

He, along with councillors Amanda Collucci, Isa Lee, Khalid Usman and Alan Ho, supported the city’s current practice. Councillors Joe Li and Jack Heath, both absent from last week’s vote, agreed, along with Coun. Jim Jones, who reversed his vote from the previous week.

Scarpitti reiterated the practice is at the request of a community member and is not “in any way an endorsement of a particular country, regime or particular head of state”.

He said it represents “an instant connection” for the city’s many groups that signifies their heritage is valued in the City of Markham.

“There’s no greater explanation than having that flag flying here to reflect the people who’ve made what our community is and, I’m sorry, if we are going to raise the flag in this community, it’s not going to take a back seat at some other community centre, it’s going to be front and centre right here at the seat of government, because we make the strongest statement that that diversity is appreciated here in this community.”

Keyes said he knew the “charged” issue would not be resolved without some controversy and hurt feelings, but added he proposed the motion in the spirit of bringing the community closer together.

“Residents who objected were not mildly concerned, they were gravely disappointed and quite upset,” he said of the city raising the Chinese flag. “We’ve heard people here today say, ‘Well if you don’t like it, just don’t attend’. That’s not an option, because it is on city property and they feel it is a representation of their interest because they pay taxes to the city, so the city government really represents them, so they can’t just ignore it when it happens.”

Keyes said when the wishes of a very small group would be granted over the silent objections of many other members of that community, it divides the community — the evidence of which was made “abundantly clear” when the city raised the Chinese flag last fall.

“We witnessed the ugly spectacle of our friends and neighbours protesting and hurling insults at each other right here in front of our civic centre and, just like today, we had to bring in extra security to help keep these groups apart and ensure public safety. It was not a proud moment for our city.”

Keyes — along with councillors Irish, Reid McAlpine, Karen Rea and Don Hamilton — said ceasing the practice of raising foreign flags on one flagpole at the civic centre would not make Markham any less diverse or inclusive.

“The idea that this is somehow going to eliminate diversity is absolutely ridiculous,” Keyes said. “Quite the contrary. It (would) go a long way to help healing some old wounds; wounds many of us are not able to understand, but exist nonetheless and bring our community closer together.”

Calling claims that support for the motion was driven by a political agenda or racial undertones “false and shameful accusations”, Keyes said he proposed the change to city policy after months of careful consideration with his ward residents.

That included 90 per cent of some 500 respondents answering “no” to a poll on his Ward 5 website that posed a “simple and unbiased” question, asking, “Should the City of Markham continue the practice of raising foreign flags at the civic centre?”

“Knowing there are geopolitical complexities and nationalist emotions at play, I would prefer not to take a side,” Keyes said. “Unfortunately, the current flag-flying policy does, in fact, force Markham council to take a side each time it approves the flying of a foreign flag. It’s forcing us to upset a great number of residents. It is divisive.”

After the pilot becomes incapable, passenger lands the plane in Florida