‘Telling my husband it’s time for him to retire’: Mississauga senior collects $103K after lottery win 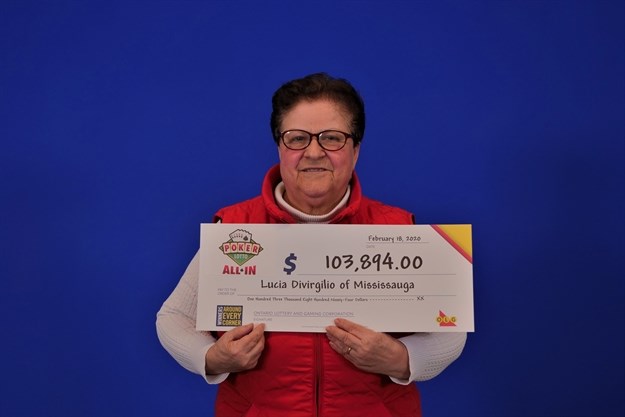 U.K.-France tensions rise over deaths of at least 27 migrants in…

‘No Progress’ On Eve Of Iran Nuclear Talks: UN Atomic…

A 71-year-old Mississauga woman is hoping to spend more time with her husband after winning more than $100,000 playing OLG’s Poker Lotto.

“This win feels good. I’m telling my husband it’s time for him to retire,” said Lucia Divirgilio in an OLG release announcing her windfall.

The winning ticket was purchased at Woodbine Racetrack in Etobicoke.

The grandmother of eight said she was waiting for her son inside Casino Woodbine while he was parking the car on Feb. 16 when she found out about her big win.

“I called to tell him and he thought I was joking,” she recalled. “It took a while to sink in.”

Divirgilio plans to buy a new car and share some of her winnings with her children and grandchildren.

“Poker Lotto players can opt for All In for an additional $1 to take a chance on instantly winning a jackpot that starts at $10,000 and grows until it is won,” said OLG in its release.

Russia Says US Rehearsed Nuclear Strike Against It This Month