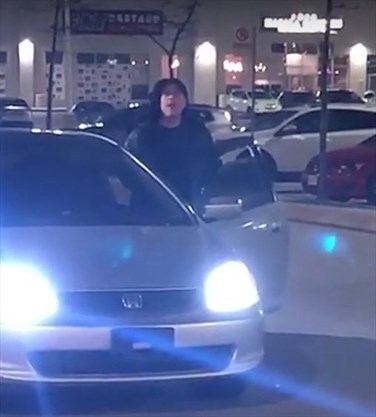 Video Posted on You Tube by Peel police –
https://www.youtube.com/watch?v=wX0fITHFHRE&feature=youtu.be

Peel Regional Police are trying to identify this suspect who was captured on video yelling racial comments and threats in Mississauga on Thursday, Jan. 30. – Screenshot/Peel Police video

Peel Regional Police are searching for a suspect who was filmed “yelling racial comments and threats” in a Mississauga parking lot on Thursday, Jan. 30.

Around 8:30 p.m., police said the man was yelling the comments towards a 35-year-old woman from Toronto.

A video released by police shows the suspect saying “get out of my face” multiple times among other comments. A man in the background can be heard telling the suspect “It’s not worth it” twice. Police said no physical injuries occurred during the incident.

The suspect was operating a silver 2-door Honda with rear out-of-province licence plates bearing 284888. He is believed to be in his 40s and was wearing a black hoodie, black T-shirt and black baseball hat.

He is also believed to have been involved in two similar incidents earlier that evening in Brampton. Police said a suspect is reported to have caused a disturbance by yelling racial slurs towards people at two separate plazas on Hurontario Street between Ray Lawson Boulevard to Steeles Avenue West between 7:10 p.m. and 7:40 p.m.

Anyone with information can contact investigators with Peel’s 11 Division criminal investigation bureau at 905-453-2121, ext. 1133. Tips can also be left anonymously with Peel Crime Stoppers at 1-877-222-8477 (TIPS) or peelcrimestoppers.ca.

Man On The Run After Killing Parents, Dies In Crash In Rajasthan’s Nagaur