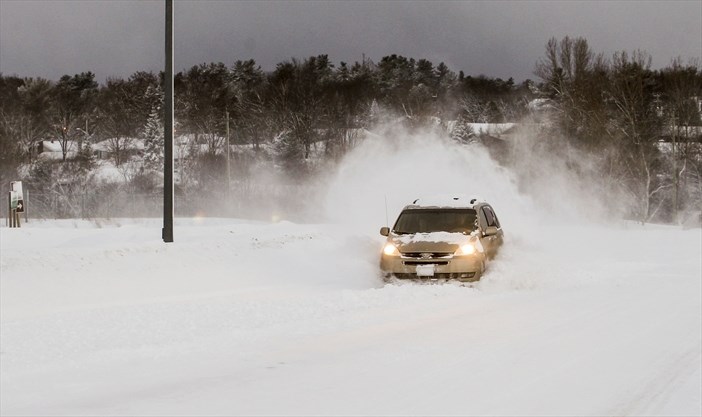 Tories ask procurement watchdog to review contracts between Ottawa, WE…

A northbound lane on Hwy. 400, approaching Hwy. 9, remains closed and traffic is snarled during the morning rush hour Feb. 27 after a dump truck rolled over, OPP Sgt. Kerry Schmidt said.

“One driver’s actions are having a huge impact on hundreds or thousands of motorists that are now stuck in this delay,” he said, adding witnesses reported the truck was “going too fast for conditions, obviously.”

The driver lost control on the snow-covered road, applied the brakes, hit a concrete barrier and flipped over, Schmidt said.

The truck was carrying soil and police are waiting for heavy equipment to arrive to remove the soil and turn the dump truck upright, he said.

The two left lanes of the highway are initially blocked with the right lane remaining open but one of the closed lanes has since re-opened, Schmidt said, adding traffic is backed up to at least Aurora Road.

He is advising drivers to exit the highway at King Road or Aurora Road to avoid the area.

Schmidt is warning drivers caught in the delay not to drive on the shoulder of the highway, saying one driver with a G license is facing charges.

The winter weather is making driving difficult but, fortunately, there haven’t been any serious crashes in York Region.

York Regional Police have responded to eight collisions since 3 a.m. but none were severe, Sgt. Andy Pattenden said.

Drivers should avoid travelling eastbound on Wellington Street East in Aurora from Bayview Avenue to Hwy. 404 because “vehicles without snow tires are struggling to get up the hill,” police tweeted.

School buses in the region have been cancelled today.

The snowfall warning that had been issued for York Region has now ended, Environment Canada said.

Presumption COVID-19 case in Nunavut, may be territory’s first infection