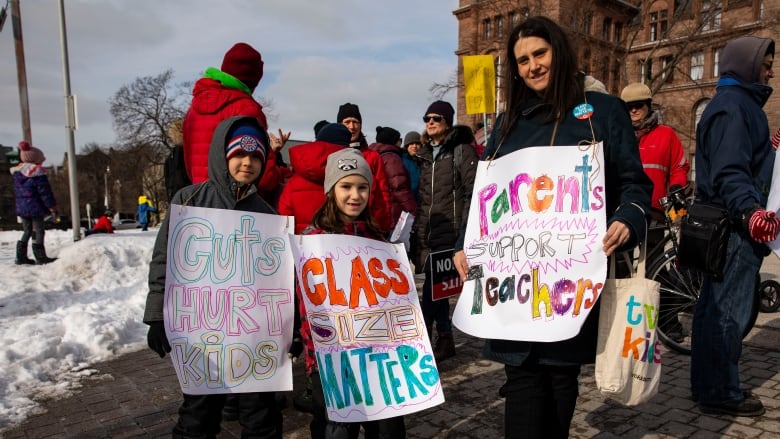 Ontario’s Ministry of Education’s has rejected some parents’ applications for funding to compensate for school days lost to teacher strikes, even though their children are eligible for the payments. Credit – (Michael Wilson/CBC)

Ontario parents are reporting new problems with the Ministry of Education’s payments for school days lost to teacher strikes, including applications being rejected for unknown reasons.

The province has sent emails telling parents their children’s information “could not be verified,” even though their children are actually eligible for the payments.

EU Chief Denounces “Lack Of Loyalty” By US Over Submarine…

The Ford government is offering parents $25 or more per child for each day their school is shut down as a result of the ongoing labour dispute with the province’s four teachers’ unions. The money comes from the wages that teachers and education workers forego each day they strike.

Parents apply via a website, by entering their child’s name, school board and school, along with their own address and contact information. However, multiple parents have told CBC News their applications for funding were inexplicably rejected.

“The information you provided on your child could not be verified against our Ministry records,” read rejection emails parents shared with CBC News. “We have removed your application from the system so that you can submit another application.”

“It’s really frustrating because they played it up that this was going to be an easy process,” said an Oakville mother whose kids attend the French-language Viamonde school board.

She has not received payments for two of her five eligible children, and the email she received does not indicate which children’s applications were rejected. CBC News agreed not to name her to protect the identity of her children, and that of her husband, who is a provincial employee.

“Being approved for three but not for two, and not telling me where I made the mistake, is really frustrating, the mother said in an interview Wednesday. “How at this point do I know if I’m doing it properly and if I’ll ever get the money that has been promised?”

More than 756,000 applications have been made for the financial support program, according to an education ministry spokesperson.

“Rejections occur when the information submitted in the application does not match ministry records,” said spokesperson Ingrid Anderson in an email to CBC News.

Anderson could not say how many applications had been rejected on those grounds, nor how much has been paid out by the government so far.

The rejection emails encourage parents to phone a toll-free helpline if they have any questions. However, the line was experiencing such heavy call volumes Wednesday that it was frequently impossible to get through, with the line ringing busy.

Those who do get through are greeted with a recorded message. “If you are calling for details regarding your application or payment status, please note that our staff are unable to access personal information or payment-specific information,” the message says.

It goes on to tell callers that hotline operates will relay their inquiries by email to ministry staff, who will investigate and respond.

The helpline handled 1,600 calls on Tuesday, said the ministry spokesperson.

Canada’s terrorism offenders are coming out of prison still radicalized