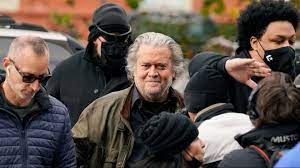 Trump ally Steve Bannon has surrendered to authorities to face contempt of Congress charges after refusing to give evidence about the Capitol riot.

Mr Bannon defied a summons to testify on what he knew about plans for the protest that ended with Trump supporters storming Congress.