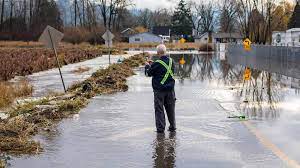 All of southwest B.C. under flood watch as 3rd consecutive storm rolls through

Hundreds remain under evacuation order; avalanches and landslides are also a potential risk

The last of three major storms is pounding southwest B.C. with heavy rain as flood-ravaged communities brace for potential evacuations and damage.

Much of Southwest B.C. is currently under flood warning, with flood-soaked regions like the Fraser Valley and the Nicola Valley east of Vancouver set to receive up to 100 millimetres of rain, while snow is also expected at higher elevations.

Up to 150 millimetres of rain is forecast for parts of Vancouver Island.

The impact from the rain is expected to be worse due to extensive damage from previous storms. The biggest, which struck the province from Nov. 13 to 15, led to landslides and rainfall records being broken, while another two before and during the weekend led to renewed evacuation orders and highway closures.

B.C. Safety Minister Mike Farnworth, in a Wednesday morning news conference, stressed that people need to be prepared if they live in a flood zone and that they should stay off roads in affected areas unless absolutely necessary.

“I want to make it clear to everyone this storm is not yet over,” he said.