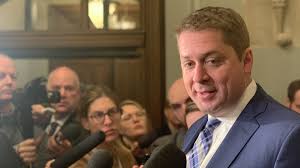 An internal Conservative Party report on the party’s performance in the 2019 federal election under Andrew Scheer blames inexperienced staffers and a decision to centralize control over the campaign in the hands of campaign manager Hamish Marshall, CBC News has learned.

The lessons-learned report — describes by one party source as “frank and extensive” — was drafted by former Conservative cabinet Minister John Baird. CBC News has spoken with multiple sources who have talked to Baird about the report’s contents.

The report also cites problems with the Conservative Party’s platform, its communications strategy and its candidate screening process, sources said.

It also includes “real world” examples of Scheer’s difficulties during the campaign — notably, the Conservative leader’s struggles to answer questions about his dual Canadian-American citizenship and whether he had falsely claimed to be a certified insurance broker.

Marshall told CBC News he hasn’t seen the report and is not aware of its contents.

After the story was published, Baird took to Twitter to say that despite there being areas where Marshall could have done better, “there was substantial praise for Hamish’s leadership,” and that he is certain the former campaign manager would agree with his report.