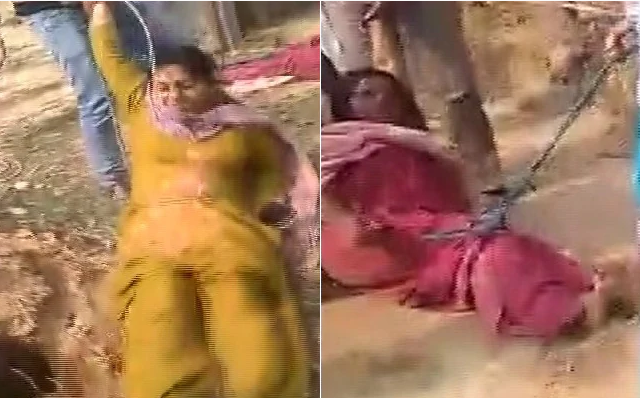 On Feb 3, 2020
Share
Kolkata:  A woman is seen tied at her knees with rope and dragged over a country road in West Bengal by a group of men led by a ruling Trinamool Congress panchayat leader. When her sister protests, she too is thrown to the ground and pulled by the arms and abused by the men led by Amal Sarkar.The women’s crime: they had protested their land being grabbed by the Trinamool-run panchayat for constructing a road.

On Sunday, the Trinamool district chief Arpita Ghosh ordered the suspension of panchayat leader Amal Sarkar from his office.

However, Sarkar has gone missing. Two others have been arrested.

The pictures and videos of the incident, which was widely shared on social media, shows Smritikona Das in a maroon maxi being beaten, thrown to the ground. A man ties a rope around her knees and another group of people drag her by her arms over the earthen road.

Her older sister Soma Das, who happened to be on the spot, shouts at the men. She too is shoved to the ground and dragged to where her sister is seen lying.

According to the two women, both in their late 20s, they were initially told that the road being built in front of their house would be 12-feet wide. They agreed to give up land for that. But when the panchayat allegedly decided to widen the road to 24 feet – which would mean the loss of much more land – the women objected.

The result: on Friday, at Fata Nagar village in the Gangarampur police station area of South Dinajpur district, around 400 km from Kolkata, when the women objected as bulldozers and road-rollers began work, they met this shocking treatment.

Both women were rushed to hospital. The older sister Soma Das who had objected to the attack on her sister was released after first aid.

Smritikona Das, who was tied at the knees, was released after treatment on Saturday.

On Sunday, Smritikona filed a police complaint, naming the gram panchayat vice chief Amal Sarkar who had directed the attack.

Smrikona Das is a teacher at a nearby high school. She lives with her mother at Fata Nagar who too was reportedly pushed around when she rushed to try save the daughters.