Over two million Ontario students were out of class Friday as the province’s four largest education unions held a provincewide strike, resulting in a complete shut down of the public education system.Members of the Elementary Teachers’ Federation of Ontario (ETFO), Ontario Secondary School Teachers’ Federation (OSSTF), Ontario English Catholic Teachers Association (OECTA), and Association des enseignantes et des enseignants franco-ontariens (AEFO) all hit the picket lines, as tensions between the unions and the provincial government continued to increase.

The labour groups said Friday marked the first time since 1997 that teachers and education workers from all four major unions walked out on the same day.

In Toronto, thousands of educators filled the streets around Queen’s Park, though the legislature wasn’t sitting. In the lead up to the protest, the unions estimated that around 30,000 educators would attend.

Security at the legislature braced for a huge crowd and road closures were implemented around the building.

In Peel Region, the four unions planned a mass picket along a 30-kilometre route on Hurontario Street from Caledon to the lakeshore in Mississauga.

OSSTF Peel tweeted that they expected to have 20,000 teachers and education workers along the route between 9 a.m. and noon.

This is Hurontario – as thousands of teachers protest #onpoli @globalnewsto 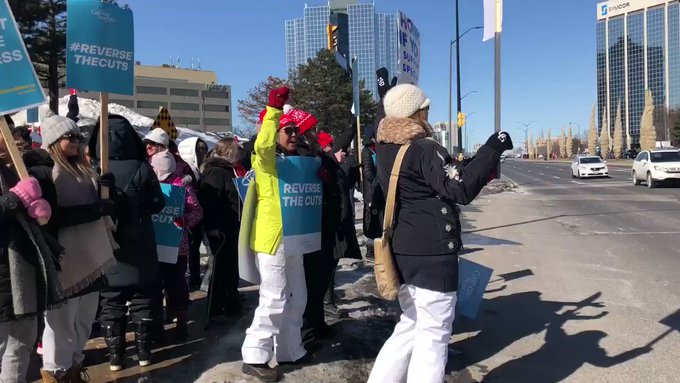 “This is a demonstration of unity. It’s a demonstration that we’re not divided from our members or from the public in this province,” OSSTF president Harvey Bischof told reporters outside of the provincial legislature.

Bischof made the remarks alongside the leaders of the province’s three other teachers’ unions.

“Our members are very clear. They will not compromise the level of education that our students receive every day across this province,” OECTA president Liz Stuart said.

Among the issues on which the government and unions continue to disagree are class sizes, e-learning and compensation. The unions have been without a contract since the end of August and have been engaging in labour action for the past few months.

The teachers unions, particularly OSSTF, are upset that the Ford government announced last March it would increase average high school class sizes from 22 to 28 — which would lead to thousands of fewer teachers in the system — and make four e-learning courses mandatory for graduation.

The government has since partly backed off on the issues, offering to instead increase average high school class sizes to 25 and require two online learning courses. The unions, however, say that isn’t enough.

All of the teachers’ unions are also asking for around two per cent in annual salary increases, while the government is sticking with a one per cent offer as it passed legislation last year capping wage hikes for all public sector workers at one per cent for three years. In December, the unions launched a court challenge against that wage cap.

ETFO says their key issues include more funding to hire special education teachers, and guaranteeing full-day kindergarten in the future.

“Our preference today is to negotiate, not to see the teacher union leaders escalate,” Education Minister Stephen Lecce said in an interview with Global News Friday morning inside Queen’s Park.

“I want to continue a focus on negotiations. We value our teachers. They want to be in class today and they want to do what they do best which is inspire learning,” he said.

OECTA and AEFO were at the negotiating table this past week, while ETFO hasn’t negotiated since the end of January and OSSTF since December.

— With files from the Canadian Press