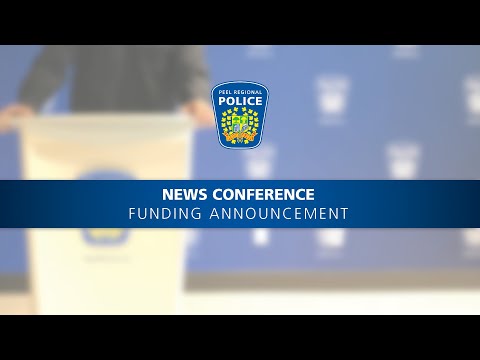 Investing Over $20 Million to Strengthen Community Safety in Peel

MISSISSAUGA — The Ontario government is providing $20.5 million to Peel Regional Police to give police officers the tools and resources they need to increase community policing, combat gun and gang violence, and keep streets safe.

“Our government is doing everything in its power to fight gun and gang violence and build safer communities,” Premier Doug Ford said. “Today we are giving our men and women in uniform even more resources to target violent criminals and put them behind bars – where they belong.”

Part of the funding will go towards Peel Regional Police’s Community Mobilization Program. This initiative assigns police officers to small teams that work directly with members of the community on projects to improve public safety including neighbourhood watches, town hall meetings, and cultural community outreach. This initiative is part of the $195 million total investment the province is making over the next three years through the province’s new Community Safety and Policing (CSP) Grant program announced last month.

“Our police services and their partners know best what they need to combat crime in their communities,” said Sylvia Jones, Solicitor General. “The investment we are making today in Peel Region will help deploy additional frontline officers and take action where and when it is needed most.”

In addition, the stable and consistent funding will help support Peel Regional Police’s fight against gun and gang violence as part of Ontario’s Guns, Gangs and Violence Reduction Strategy. Both initiatives build on the investment Ontario has already committed to create an Intensive Firearm Bail Team in Peel Region to focus on prosecuting those involved in firearms offences in the Greater Toronto Area starting this year.

“We are escalating the local fight against gangs who prey on young and vulnerable people in Peel Region and other communities across Ontario,” said Attorney General Doug Downey. “Together, we are determined to keep families and communities safe by supporting local police and specialized prosecutors.”

“Public safety is the number one priority of Peel Regional Police,” said Peel Regional Police Chief Nishan Duraiappah. “This provincial funding will support our comprehensive approach to mitigating and ending gun and gang violence. We look forward to enhancing our response to this serious risk in our community.”

“On behalf of my Board colleagues, I want to thank the Premier and the provincial government for their investment in the resources required by Peel Regional Police to tackle escalating gun and gang violence in our Region,” said Nando Iannicca, Peel Regional Chair. “Today’s announcement is another example of how we are working with our provincial partners to ensure we provide a safe and healthy community for all our residents.”