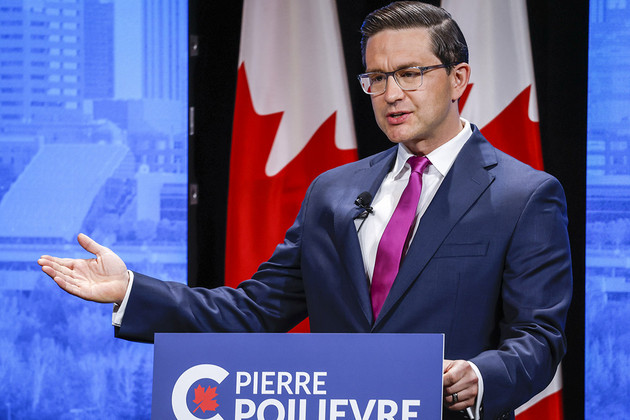 The video claims Poilievre is friends with big businesses and the corporate elites.

On Tuesday, at 1:06 p.m., a video ad was posted on NDP’s official Twitter handle.

The tweet said, “There’s something you should know about the 𝑟𝑒𝑎𝑙 Pierre Poilièvre. He’s in it for CEOs, not you.”

A video was embedded in the tweet which is titled “Who is the real Pierre Poilievre?” A picture of the newly elected conservative leader has also been incorporated in the video advertisement with a monochrome filter. It further claims that “He’s not in it for you,” and goes on to mention the reasons for the same.

The video claims Poilievre is friends with big businesses and the corporate elites. It also quotes, “He’s received big contributions from those who have profited off the housing crisis.” Poilievre is also attacked for voting against making CEOs pay what they owe and the minimum wage, twice.

One of the Supporters of the Conservative leader replied to the tweet saying, “Jagmeet, with his Rolex watches, Gucci Suits, BMW car, now there’s a common man for the people.”

The tweet and the video are a direct attack on Pierre Poilievre and is questioning his statements made to the public.

There's something you should know about the 𝑟𝑒𝑎𝑙 Pierre Poilièvre.

He's in it for CEOs, not you. pic.twitter.com/3Oem8Wn0Fb

However, Poilievre has not yet responded to the video.

Pierre Poilievre was elected as the new leader of the Conservative Party of Canada on September 10 After receiving 68.15% votes and outpacing Jean Charest with 16.07% votes. The results of the mail-in ballot elections were announced at an event in downtown Ottawa on Saturday night.