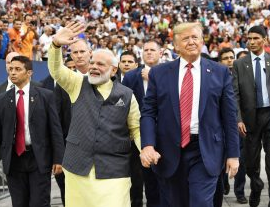 There’s Much To Gain From Trump-Modi Friendship: Nikki Haley

Nikki Haley said that she is proud to see Trump and First Lady Melania travel to India.

Washington: Prominent Indian-American politician Nikki Haley has said that there is much to be gained from the friendship between Donald Trump and Prime Minister Narendra Modi during the US President’s maiden official visit to India.

Ms Haley, who was America’s envoy to the UN in the first two years of the Trump administration and the first-ever cabinet-ranking Indian-American in any presidential administration, said that she is proud to see Trump and First Lady Melania travel to India.

“The US and India are the two largest democracies in the world and share many values. There is much to be gained by the friendship of Modi and Trump,” the 48-year-old top Republican leader and former South Carolina governor said in a tweet.

Former White House official Peter Lavoy said that the Modi-Trump summit “will be consequential” because security ties will be advanced, Kashmir issue will be deferred, Afghanistan will be managed, trade differences will be mitigated, energy ties will be enhanced and defence deals will happen.

“All Americans look to 1.3 billion Indians to warmly embrace and celebrate America, as America has embraced and celebrated us here – E Pluribus Unum (the motto of the US). Now, it’s time for our Motto to also mean: two proud sovereigns, bound in history and racing towards a joint destiny,” said Ravi Batra, a New York-based attorney.

It is important that the US shares India’s intel and biometrics databases seamlessly with its Homeland Security, Defence Department and Law Enforcement to jointly fight and defeat Terror; and “India swapping its H-1B workers” Social Security contributions for an enhanced number of H-1B worker Visa limit,” he said.

“President Donald J Trump is in India, bringing America’s bipartisan love-filled hug for 1.3 billion strong PM Narendra Modi that none other than Christopher Columbus applauds loudest. India’s “tryst with destiny,” is finally a full throated bilateral and bipartisan success commensurate to the joinder of the oldest and largest democracies,” Mr Batra said.

Noting that both Mr Trump and Mr Modi espouse the ”national interests” of the US and India respectively, Amit Kumar, an international security consultant, said that building on the cooperation in defence and energy, and the collaboration witnessed in counter-terrorism and in safeguarding the economic and military security of the Indo-Pacific, the two leaders have interlocked the interests of their respective nations in a mutually-interdependent and symbiotic relationship of convergent interests and a shared bilateral vision.

Mr Kumar had previously worked with the al-Qaida Taliban Sanctions regime at the UN where he offered substantive advice on matters relating to the implementation of Assets Freeze Sanctions measures against the al-Qaida and Taliban as well as issues relating to countering the financing of terrorism.

“India visit of President Trump is a historic milestone in the relationship between the world’s largest and oldest democracies,” said Al Mason, advisor to Global Real Estate Investments, Education Institutions and Hospitals.

“It’s once in a century event,” he said, referring to the hundreds and thousands of people who would line up to welcome the president from airport in Ahmedabad to the cricket stadium wherein he would address a gathering of more than 100,000 people.

“This reflects the charisma of both President Trump and Prime Minister Modi,” he said.

In a tweet, Congressman Alan Lowenthal said that while India is a vital partner, “the US is wrong to ignore growing threats to human rights there”.

“We cannot abandon our responsibility to provide a voice for the voiceless,” he said.

Federation of Indian-American Christian Organizations or FIACONA in a statement thanked the White House for telling the media that Trump will raise the issue of religious freedom with Modi.

“This is indeed a good first step to address this serious problem,” said the organisation representing Indian-American Christians.

Why the Coronavirus Seems to Hit Men Harder Than Women

Mizoram To Continue To Provide Humanitarian Aid To Myanmar…