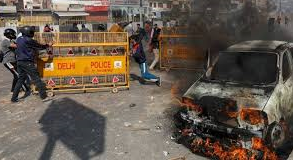 o action was taken on my complaint, Naresh Gujral has written to Amit Shah on Delhi violence

Shiromani Akali Dal MP Naresh Gujral has written to Home Minister Amit Shah and Delhi Lieutenant Governor Anil Baijal, accusing the Delhi Police of inaction and apathy while dealing with complaints during the violent clashes in northeast Delhi since Sunday, in which 35 people have been killed and over 200 injured. The Delhi Police reports to the Home Ministry.

Mr Gujral, whose party is an ally of the ruling BJP, said the police took no action on his request for assistance to 16 Muslims who were trapped in a house in northeast Delhi’s Maujpur locality on Wednesday night while a mob was trying to break in, despite him telling them he is a Member of Parliament.

“I explained the urgency of the situation and told the operator that I am a Member of Parliament. At 11:43 pm, I received a confirmation from the Delhi Police that my complaint had been received along with the reference number 946603… However, much to my disappointment, no action was taken on my complaint and those 16 individuals received no assistance whatsoever from the Delhi Police” Mr Gujral wrote.

The Akali Dal MP said the 16 Muslims managed to escape only because some Hindu neighbours came to their rescue.

“If this is the situation when a Member of Parliament makes a complaint personally, it is not surprising that certain parts of Delhi continue to burn while the police stands by apathetically,” the letter added.

Northeast Delhi has been on the edge since Sunday with vandalism, arson and unrest over the contentious citizenship law. Hundreds of police and paramilitary personnel are patrolling the streets of the region amid reports of sporadic violence today.

35 people have died in violence clashes in Delhi since Sunday

In December, the rift between the Akalis and the BJP had emerged after Mr Gujral had told NDTV, “We feel the Muslim community should be included in the citizenship law”. He had also issued a veiled warning to the BJP at the time, saying several parties in the BJP-led front were unhappy with the way they had been treated.

However, the Akali Dal, late last month declared that certain “misunderstandings” between the two parties have been amicably resolved.

Due to the controversial citizenship law, Indian citizenship will be awarded on the basis of religion for the first time. The government says it will help non-Muslim refugees from three Muslim-dominated neighbouring countries if they fled to India because of religious persecution. Critics say the law violates secular tenets of the constitution.

Mizoram To Continue To Provide Humanitarian Aid To Myanmar…

British Government “Doesn’t Do What It…