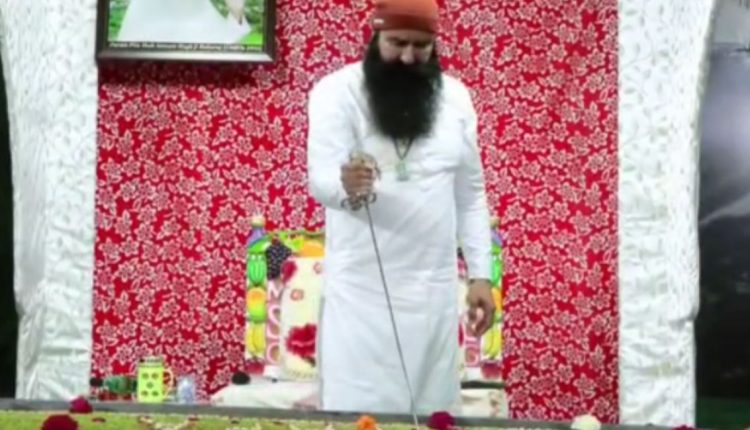 In a viral video making rounds on social media, Dera Sacha Sauda chief Gurmeet Ram Rahim can be seen cutting a giant cake with a sword while out on a 40-day parole from a 20-year jail sentence.

Ram Rahim walked out of the Sunaria prison in Rohtak, Haryana on Saturday on a 40-day parole that, according to his bail application, was asked for by the Dera chief to attend the celebrations on the birth anniversary of former Dera chief Shah Satnam Singh, which is on Wednesday, January 25.

The Dera chief is currently serving a 20-year sentence for the rape of two of his female followers.

Ram Rahim, convicted of rape and murder, cut the cake with a sword Dera Sacha chief, who came out on parole for 40 days, did video conferencing. pic.twitter.com/H0RUiZmHQ7

Punjab Governor: Drugs Have Entered Schools and Children are Getting…

In the visuals circulating on social media, the Dera chief can be seen saying, “Got a chance after five years to celebrate like this so I should cut at least five cakes. This is the first cake.”

It may be pertinent to note that the public display of weapons in India is prohibited under the Arms Act.

On Monday, Ram Rahim inaugurated through video conferencing a mega cleanliness campaign organised by his followers in Haryana and other states.

Dera chief Gurmeet Ram Rahim was convicted by a special CBI court in August 2017 in Panchkula.

9 dead after 3 more shootings in the US

Weather: North India in grip of a severe cold wave